Well Saturday I didn't make any plans besides going to my booth late in the day to take measurements... because as of August 1st I will be doubling my booth space!  My booth neighbor moved out and the mall owner offered me the space.  I jumped on it, because I REALLY want my garage back.  I've been parking outside for the last 2 weeks.  It makes me nervous with all the severe storms that have been drifting through central Indiana.

I hadn't made any plans because I volunteered to stay home to wait on the cable man (read: had to because bf went to Chicago).  The cable guy thankfully arrived 30 minutes before he was even scheduled to.  He was there for about 45 minutes working with me to see if we could actually get the cable installed... and without a lot of work... the short answer was no.  Why does AT&T run their cable through phone lines?  My phone lines were in the worst possible spots to put a TV in front of it.  If I didn't move where our TVs were at, they would have to run cables across the room, or have to run new cables and drill holes in my walls.  NO THANK YOU.  I could only imagine how much that was going to cost me.  So, I decided to cancel the order.  Hopefully another cable company offers service in my neighborhood.

Anyways, long story short, I called mom and told her to come over as soon as possible.  We were going to go to the booth and get this measuring done quickly.  And maybe hit an estate sale on the way.  Well  mom arrived around 10, and I informed her, "I hope you don't have plans, because we're going to an auction instead."  I hadn't looked at any auctions for Saturday, because I had assumed that I wouldn't be able to attend any because the cable man would be working for awhile.  So, we ended up at an auction about 45 minutes after it had started.  I planned to bid on several pieces of furniture and nothing else.  I made promises to people (ahem, bf) that I wouldn't buy much more junk unless it was going to the booth.

Well, I couldn't help myself.  My mom was on board too.  She has tried to help me keep my promise.  But, we both agreed that the prices were TOO GOOD to not buy.  So, I did.

I posted this picture to my Facebook after I had been at the auction for about 2 hours.  I had bought all of this stuff.  I bought a few more things after this, including a table (see below).

My new truck has really come in handy.  It fits a lot more than my old one.  I got home from the auction at the exact time my bf arrived home from Chicago.  And he didn't get an explanation, he just saw this truck load.  However, after telling him it was all heading to the booth in a week, he helped unload.  What a good guy - definitely a keeper, right?

So, you guys are ready to see all the goodies right?  The only thing I didn't photograph were all the vintage sheets I picked up, because they are going straight to a friend who collects/uses them.

The bf sat outside with me yesterday as I was putting my "vignettes" together to photograph.  I think he thinks I'm crazy.  I told him that you guys really like to see what I've bought.

I did offer these pennants up on my FB page as soon as I bought them at the auction.  They're $2 + $2 shipping (to anywhere in the US).  Send me an email if you want one.  All mostly say Flackville, IND or St. Michael's School, which are both local schools.  Flackville has since shut down, but the old school building is still there.  I drive by it every day on my way to work. It's for sale, too.  It's sadly in a part of town that is pretty run-down.  I've seen images of the inside of this - covered in graffiti - everything just falling apart. 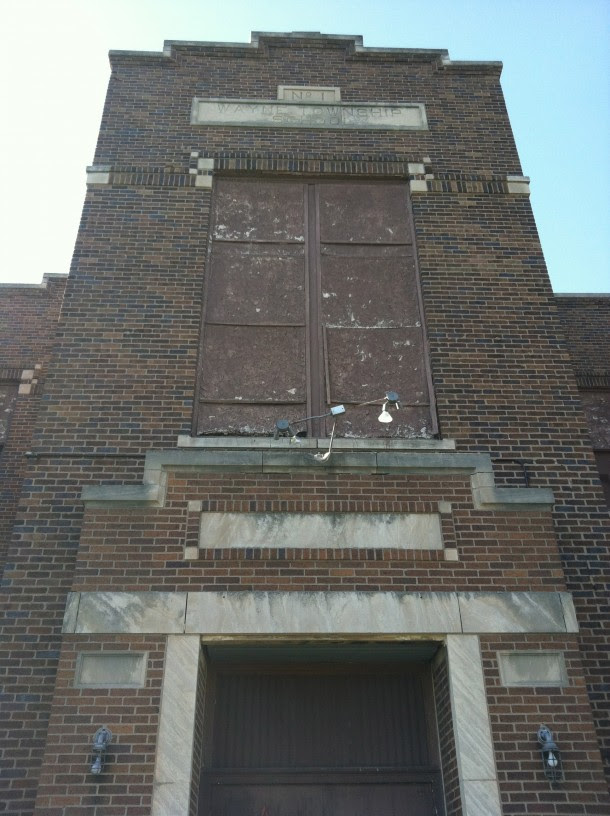 Anyways, onto more junk, and less sad pictures of old, run down buildings.

Close up of the box of matchbooks...

You know I had to buy EVERY. SINGLE. vintage Christmas thing offered up at the auction.  Keeping the light up tree stand for myself.  Sorry.

Have you ever seen these giant matchbooks before?  The matches form a picture on them.

I know Santa's sleigh is broken, but I thought someone would still love him.

It also wouldn't be an auction if I didn't go home with some vintage kitchen stuff... namely, Pyrex.

So apparently I found a "holy grail" Pyrex piece... a Rodney Kent "Starline Series" black 503.  It comes with a metal cradle.  I looked high and low for that metal cradle at the auction.  It was nowhere to be found.  Either way, this piece is supposedly fairly rare.  It is in absolutle mint condition.  Not a nick in the paint, body, or lid!  Would you like to own it?  Send me an email!  It will probably head to eBay or etsy otherwise!

Next - my FIRST addition to my vintage wedding!  This milk glass cake stand will be perfect for the cake I have in mind.  It will be a small one, since my family isn't big on cake.  I plan on having lots of different pies.  I'm thinking about the delicious pies the Amish make and I'm starting to get hungry.

If you click the link for "vintage wedding" above it takes you to a new page on my blog.  This is where I will be linking all my posts that have absolutely anything to do with my wedding.  So, if you're interested in vintage wedding stuff - be sure to check this out.  If you go to my home page, there are tabs at the top of the screen - one of them for the wedding posts.

Well, that's it.  Next weekend I will be spending hours in my new bigger booth.  can't wait to show you all how it turns out.  So look out for pictures next week.

You still have time to link up to Thrifty Things Friday here on my blog.  Click on the picture below to head on over and submit your link.  You have until Tuesday at 11:55P EST.

In the mean time, I'll be linking up here:
Thriftasaurus
Show and Share
History and Home
Ivy and Elephants
Vintage Thingie Thursday
Share Your Cup Thursday
Junkin Joe
Posted by Melissa at 10:52 AM

Email ThisBlogThis!Share to TwitterShare to FacebookShare to Pinterest
Labels: auction, wedding, what I bought