A Few Finds From Edinburgh, IN

Hey guys!  Life has been pretty busy around here.  After a two week Spring Break from my Master's program, I'm back in school.  It was rough going back, but at least the semester is half way over.  I did get to go to an auction last Saturday.  They had a lot of goodies, but prices were high since it was the first auction in Edinburgh in quite awhile.  Anyways, I did get to come home with a few goodies.  And before I start showing pictures... I DID buy 2 pieces of furniture.  I had them both sold before I even left the auction! 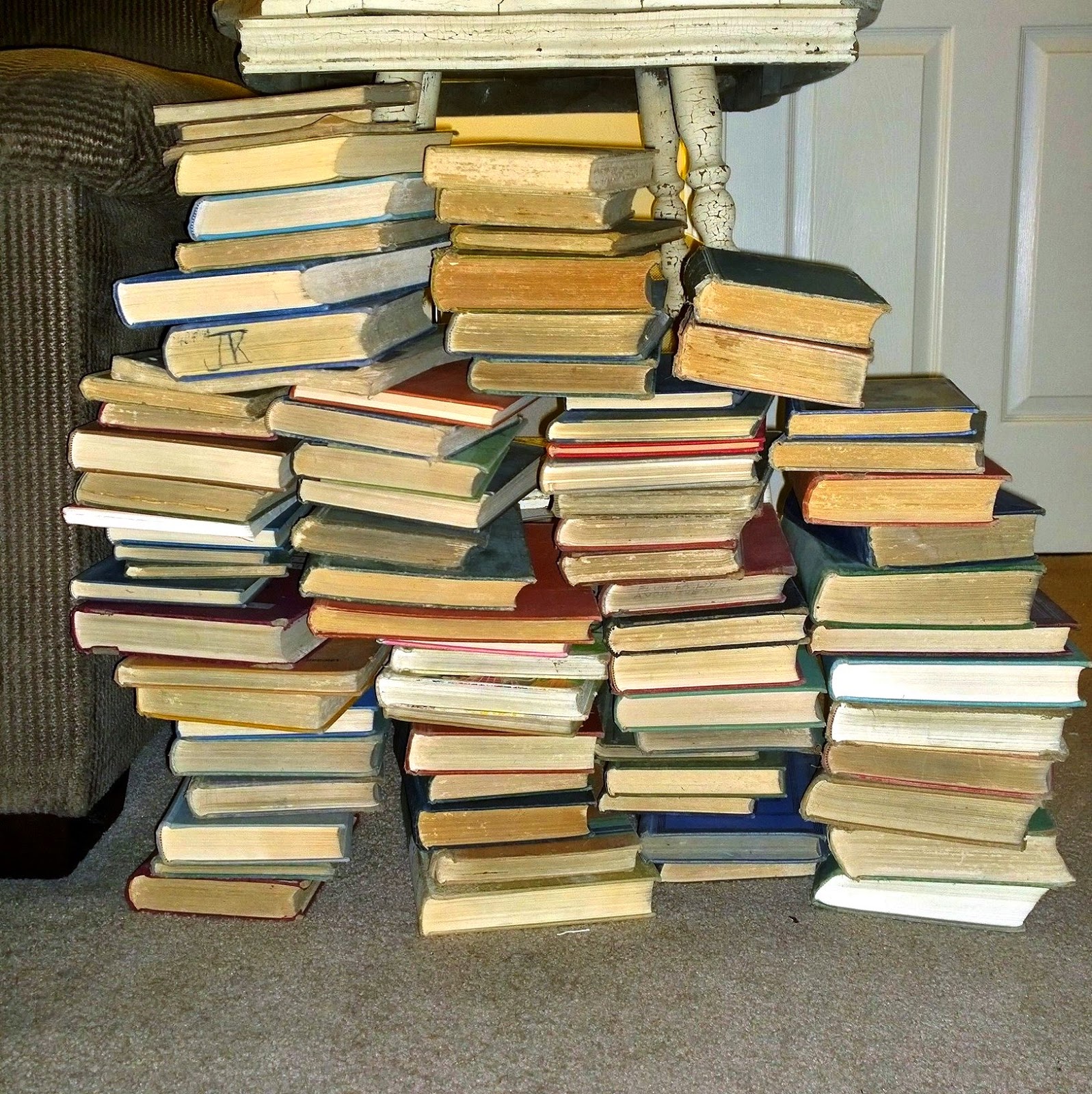 Like these piles and piles of books.  I could've bought more, but I restrained myself.  Not pictured here is the HUGE box of vintage sheet music I bought.  What's the best way to sell that in the booth?  Bundles?  By the piece? 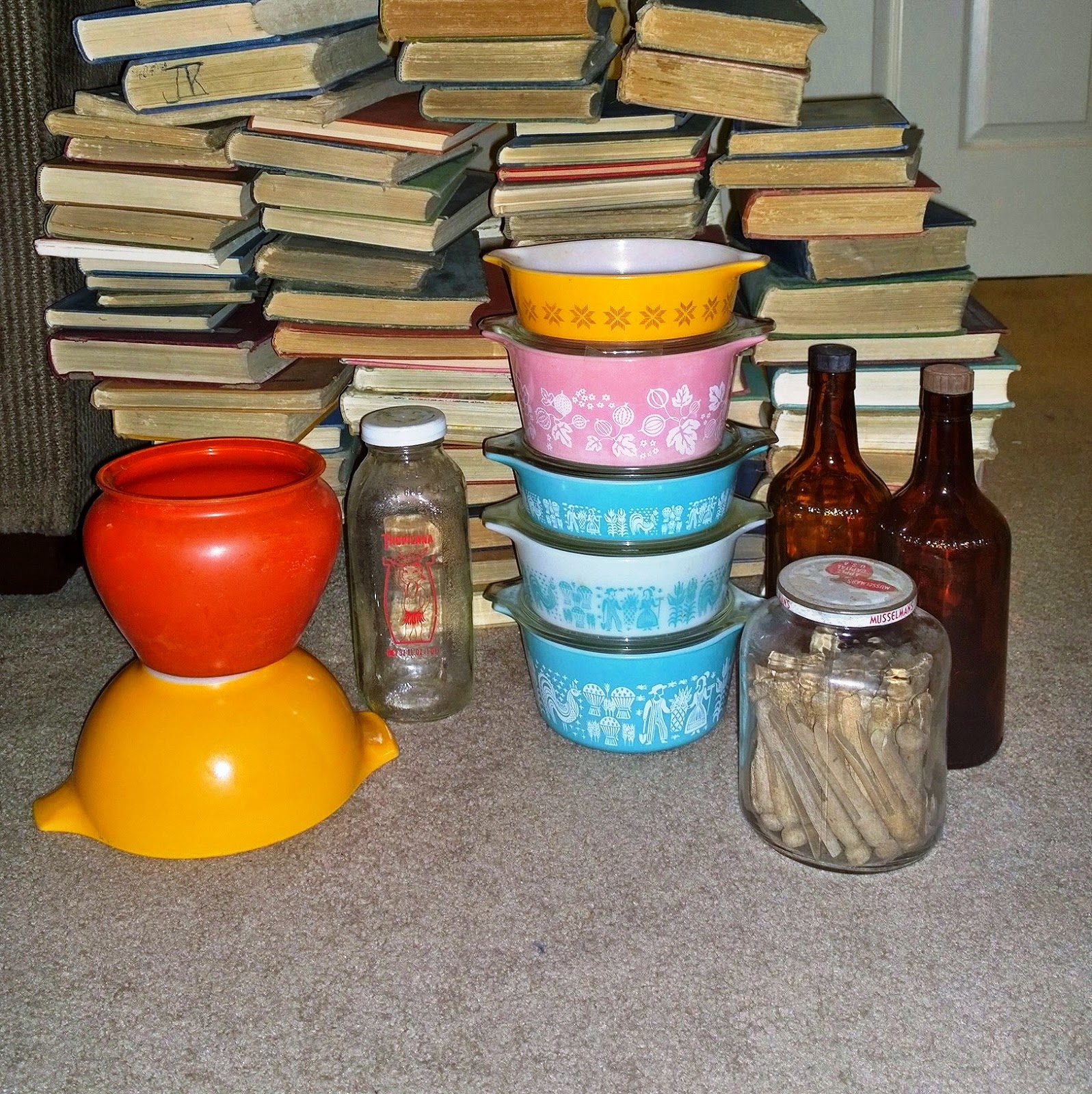 Here are my few smalls.  I've been pretty lucky with Pyrex lately. 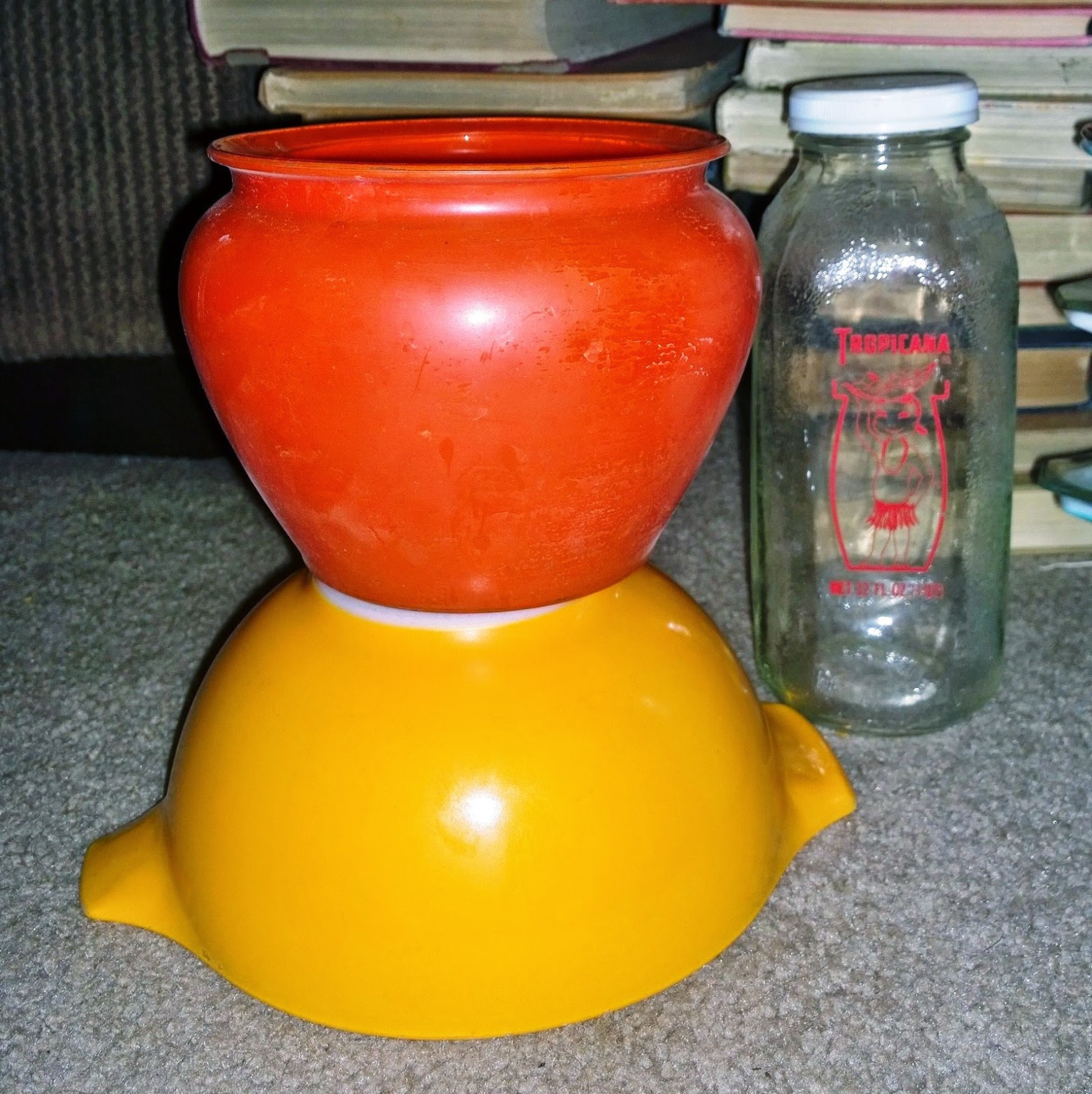 Not sure what this orange fire-on jar originally held.  Don't think I saw a maker's mark.  The orange 442 is mint and belongs to the Friendship set.  I thought the glass juice bottle was cute, even though it isn't very old. 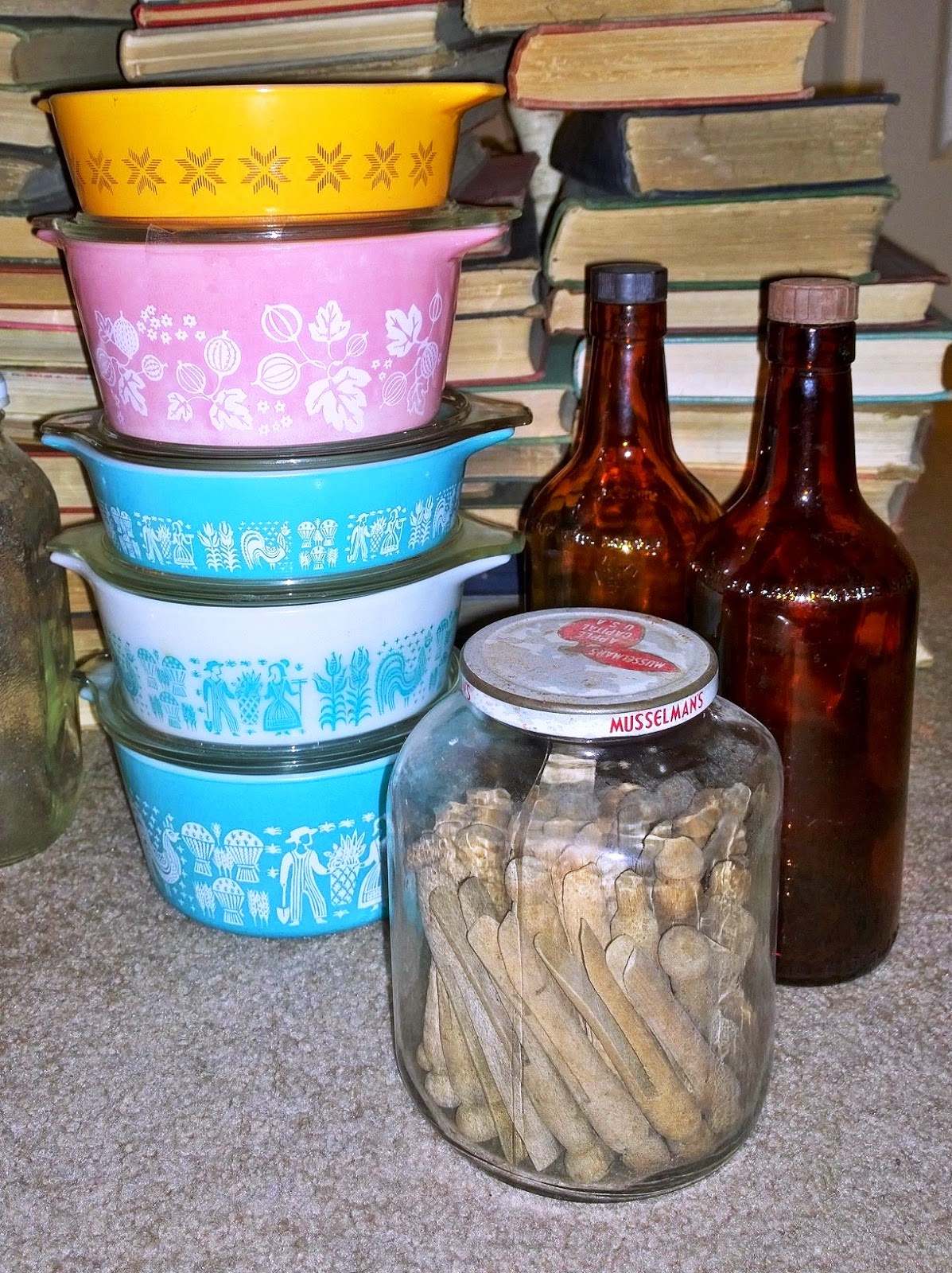 The aqua and pink Pyrex sell pretty quickly in my booth.  I bought this jar full of clothespins just for the clothespins... but upon further inspection, I think I'll just leave them in there and sell as is.  I also sell a lot of bottles, so these amber ones will head to the booth. 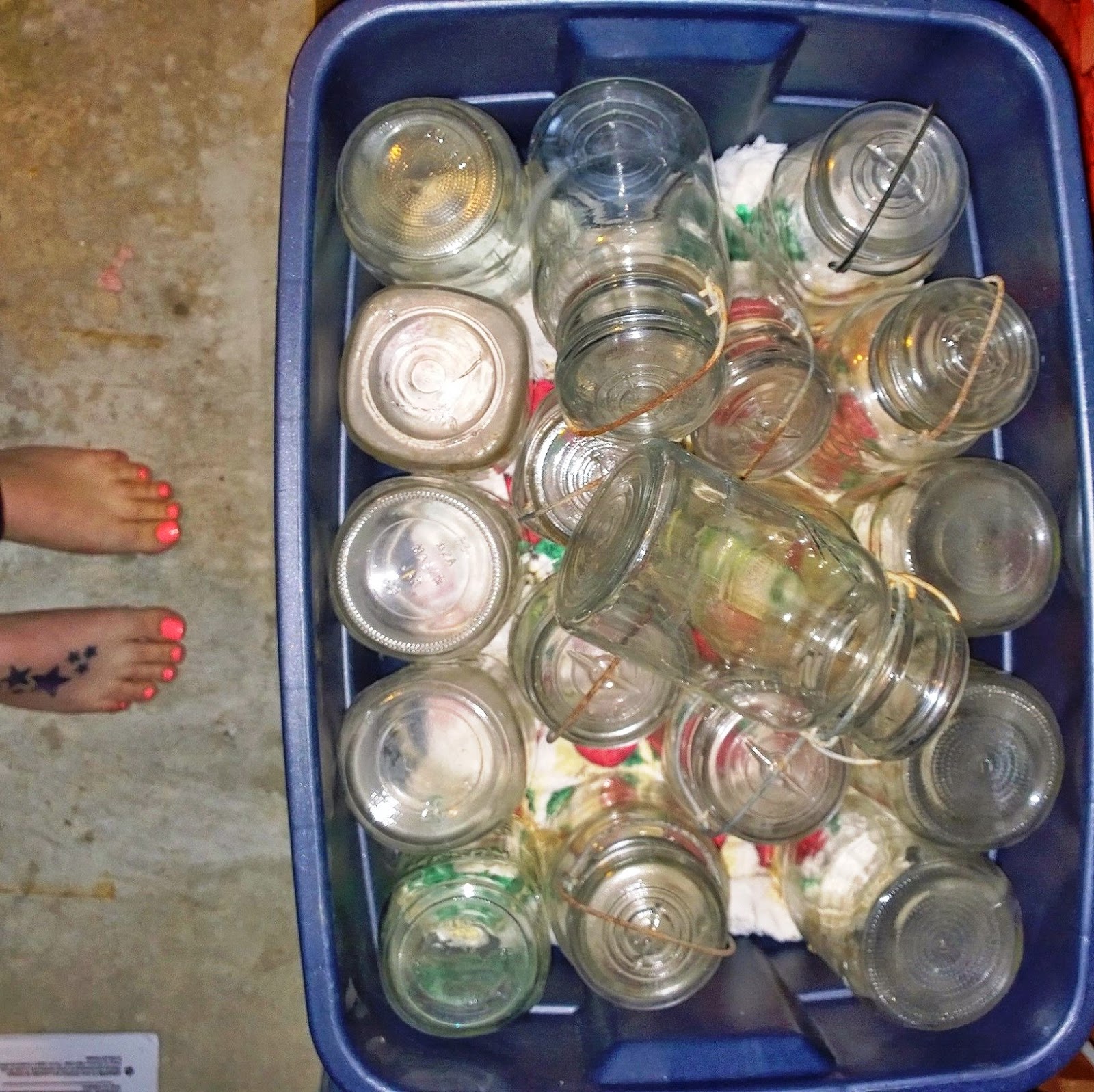 I can never have too many ball jars.  The wire bail ones with the glass lids will hold small stuff such as wood spools, clothes pins, buttons, etc. and head to the booth.  The others will be used for future tomato canning in August and September.

That's all for this week.  It doesn't seem like much, but I was able to spend time with an auction buddy, so that made the day worthwhile!