Finds from Labor Day Weekend + This Past Weekend

Guys!  Where is the time going?  This past week was a little rough.  Thinking that the shorter daylight hours are starting to get to me already.  I didn't find motivation to unpack my finds from Labor Day until the Friday after.

For the past several years I attend the Worthington, Indiana Town Wide Yard Sale.  My best friend moved there several years ago after she got married.  So, I get to visit her and go yard sale shopping!  The town itself is not that large, but there are SO MANY sales that you need some type of vehicle to get around in.  And I don't mean your car, because there are so many people that come to this event, every street is lined with cars and the traffic is really horrendous.  Most people in town own a golf cart, four wheeler, or gator.  Usually I roll around town in my dad's Yamaha Rhino (pictured below from Instagram from the 2014 sale).

Okay, so anyways, onto my obligatory trunk shot.  It seems extra full because there's 2 large plastic folding tables and 2 bags of clothes.  I brought them down to contribute to my best friend's yard sale.  Plus I made $70 selling some clothes, so it paid for most of my stuff I bought. 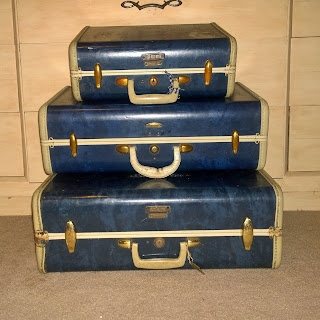 I saw a man carrying these from his pickup.  Asked if they were for sale.  After a little back and forth they were mine.  I love how they didn't even make it to his sale. 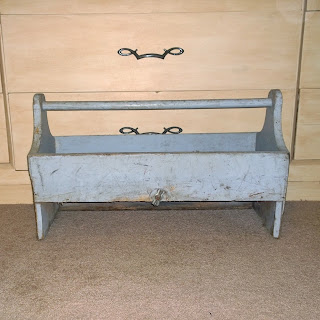 I picked this up at a random yard sale I stopped at on my drive down to my best friend's house on Friday afternoon.  I know it's missing the drawer, but for $2, I thought it would make a cute planter. 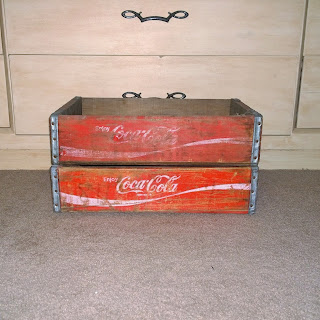 I apparently can never have too many of these. 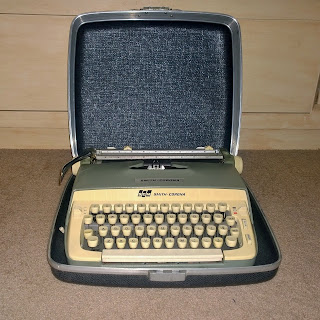 As if I needed another typewriter. 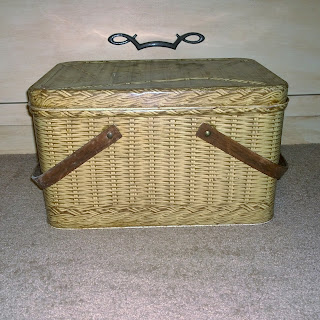 These tin picnic baskets seems to be getting harder and harder to come by... because they're so pricey. 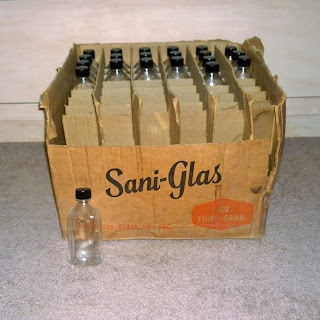 I bought this box of new old stock 68 Sani-Glas bottles for a steal. 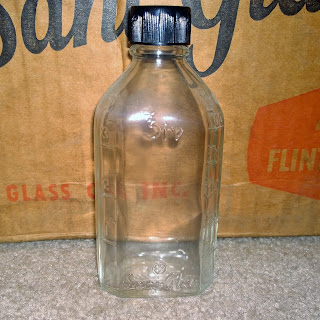 I love the embossed lettering.  On the bottom it is embossed Brockway (the maker). 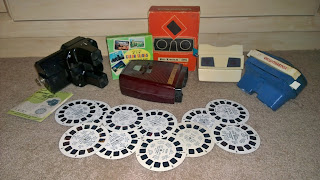 I've never bought a view finder before.  Weird, right?  Well, I got all 3, except the brown one (with orange box) and slides at one sale.  See the box of green slides in the back?  They're square 2" slides that take a special view finder.  I never thought I'd find the right view finder for them.  Well several stops later the brown one with the orange box appeared.  It was meant to be! 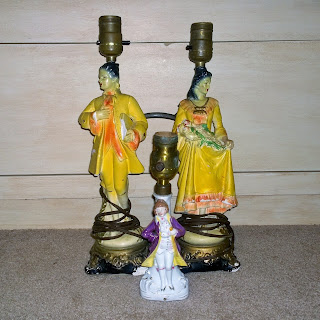 It was a weird figural lamp day.  The chalkware pair in the back are chippy and odd, but I took a chance for a buck.  They still have their cords and need to be tested to see if they work.  The guy in the front is marked with only 3 small straight parallel lines.  Well, his cord was cut off at some point, but looked to be like an early 1900s-1930s style cord.  He can easily be rewired, but I sent him off to live in the booth.  Someone else can tackle that project. 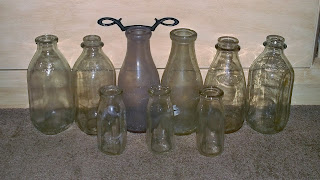 I found several more milk bottles and creamers including the purple one. 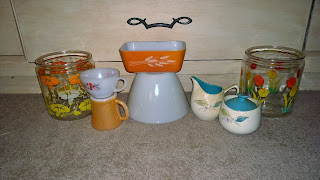 Please bear in mind I didn't clean up the items before taking pictures... which explains the dirt covered sugar and creamer.  I've been slowing down on Pyrex buying, but when you find a fridgie, you always buy it.  This is my first autumn harvest fridgie. 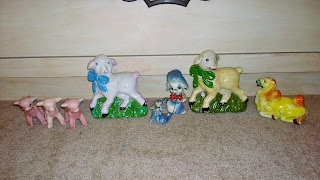 2 lamb chalkware pieces, the rest are ceramic.  Aren't they just all so cute?  The camel is a single salt/pepper shaker that's missing his mate. 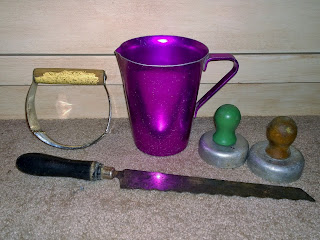 A few vintage kitchen items all priced at 25 cents or less. 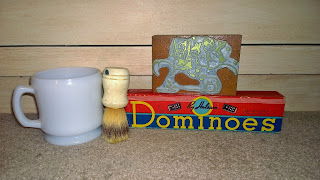 Another shaving mug for my mantique section of my booth.  I love this box of old wood dominoes.  And this printer's block... 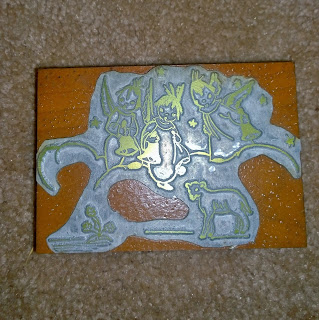 Take a look at how precious that is!  3 little angles watching over a little lamb. 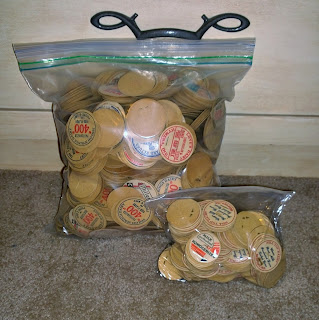 I've had really good luck selling milk bottle caps, so I thought I'd splurge a little and buy these!  Well, I thought I was splurging, anyway.  I guessed that between the milk and creamer caps pictured there were about 500.  Well I counted them (with help from the fiancee) and there were 1,336!!  I held a giveaway on my instagram page to guess how many there were.  I'll be announcing the winners today. 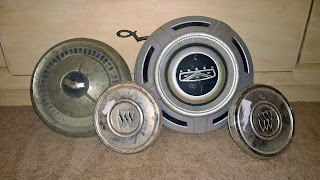 I had to pick up some more hubcaps for the mantiques section of my booth.  I knew the smaller ones were Buick.  However, I was stumped by the back 2.  After some research, I found the one on the left belongs ONLY to a 1957 Chevy Bel Air.  The right went on several 1960s Ford trucks.  They were called "dog dish" hubcaps. 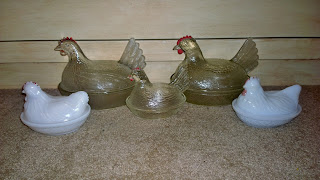 Lastly, I bought some hens on nests.  The lady I bought them from had collected them for years.  She said she was tired of collecting them, so she brought her whole collection out to sell.  I missed some of the awesome colored ones, but picked out these 5.  I sell them every now and then in the booth, as long as they're priced right (low, that is... they aren't worth much).

Now, that brings me to this past weekend.  Mom and I cleaned up the finds from above to take them to the booth.  We decided to stop at a couple of estate sales along the way.  The first one yielding nada.  The second one - I wish I had been there the first day... but I was lucky and found a few things after digging through the basement. 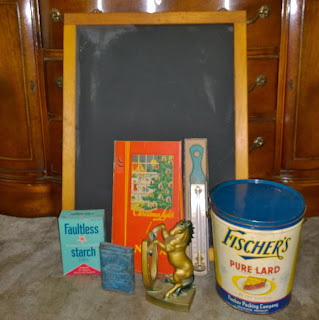 I got this large vintage chalkboard, unopened box of starch (perfect for your vintage laundry display), a box of Noma Christmas lights, vintage aqua candy thermometer, tobacco tin, single Lefton horse book end, and a lard tin.  I also bought a midcentury metal shelf that I forgot to snap a picture of... but it looks exactly like this one below (I now own 3 of them!) 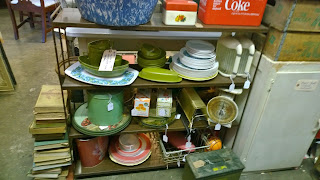 And that's all for my finds for these past 2 weeks.  I really should be ramping up buying for this winter, since we're predicted to have a pretty bad one.  They say it will be like the one we had 2 years ago, which was the coldest and snowiest winter on record in like 40 years or something crazy.

I did happen to finish my final project for my wedding this weekend.  Follow that link to see what I'm talking about.

Email ThisBlogThis!Share to TwitterShare to FacebookShare to Pinterest
Labels: estate sale, garage sale, what I bought